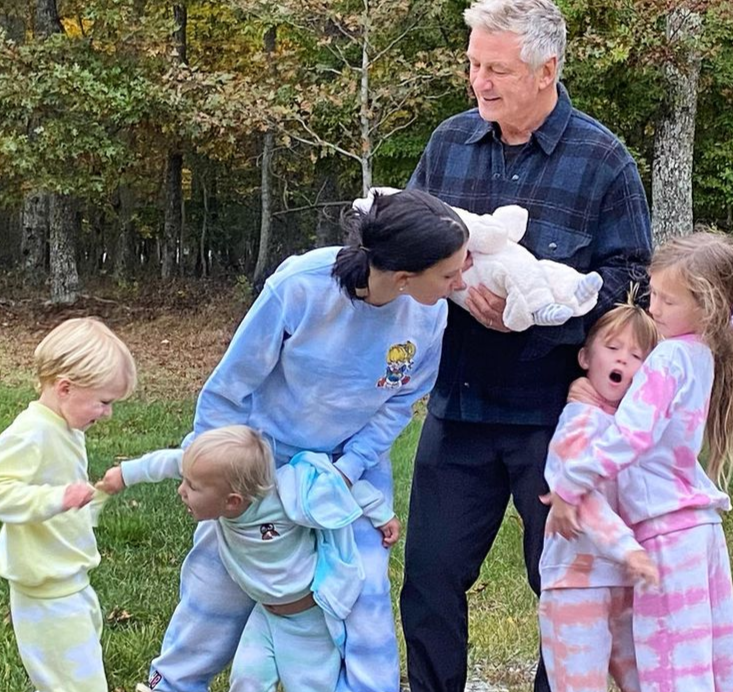 Hilaria Baldwin, the name that has recently been on-trend after a tweet questioning her Spanish identity went viral earlier this week, December 21, 2020. With the tweet going viral, Hilaria was questioned for her identity and culture leading to the accusation of cultural appropriation and her pretending to be Spanish to which she even has responded powerfully.

Not only the thing that she is on the news for the first time…well Hilaria has been in headlines several times before especially for her personal lifestyle and her Instagram posts.

Besides, Baldwin is quite popular when it comes to one of the most popular celebrity couples as she is the wife of popular personality, Alec Baldwin. In this world of love and hatred when there is chaos over marriage, short-term relationship, especially in Hollywood there are still some exceptions for a Hollywood couple to be together for long-term whose relationship isn’t just stable but is thriving.

Their relationship has not only left an impact on Hollywood but has drawn much attention on social media sites as they already are the parents of their 5 children within a marriage of 8 years.

Here are 10 things you may not know about Alec Baldwin Wife, Hilaria Baldwin.

Hilaria Baldwin is the current and the second wife of Alec Baldwin. Alec “Alexander” is a popular American multi-talented personality; actor, writer, producer, comedian, and political activist, who initially rose to fame appearing on seasons 6 and 7 of the CBS television drama, “Knots Landing”. He is more certainly known as the eldest of the four Baldwin brothers in his family.

Following her marriage to Alec on June 30, 2012, Hilaria got immense popularity and a step closer to becoming one of the best Hollywood couples.

The fact that makes Hilaria and Alec’s marriage more special is the decade long age gap between the two lovers. Alec, born in 1958 is currently in his 60s while Hilaria born in 1984 is currently in her 30s. Despite the gap of almost 2 decades-long, the lovers never hesitated to love each other and didn’t let that thing bother their relationship.

Just within a marriage of 8 years, Hilaria who is just 36 years old is already a mother of her 5 children. Soon after her marriage in 2012, the couple welcomed their first child, daughter Carmen born on August 23, 2013. Just two years later, on June 17, 2015, they welcomed their first son together, Rafael Homas, then Leonardo Angel Charles, born on September 12, 2016, Romeo Alejandro David born on May 17, 2018, and recently on September 8, 2020, their fourth son, Eduardo Pau Lucas.

Even so, Hilaria has been handling her family of 6 along with her husband. They have been co-parenting their children together giving them proper education and love. The Baldwin family ended the year 2020 visiting a place along with their children where Alec proposed to Hilaria back in 2012.

Not every good news comes with a blast sometimes people have to go through a lot. When other women would feel uncomfortable comforting their miscarriages(losses), Hilaria helped to create a space when she revealed about her pregnancies and miscarriages via her social media sites.

She went through 2 miscarriages just in the year 2019. She supported herself to be strong when she lost her two precious gifts even without touching them. She even wrote a message which reads; “We are not Ok right now, but will be. We are so lucky with our 4 healthy babies—and we will never lose sight of this”.

Accused of pretending to be Spanish

Recently on December 21, 2020, Hilaria Baldwin became a hot topic of discussion when she was accused of cultural appropriation and hiding her identity for years. It all started when a Twitter user Leni Briscoe posted a tweet that read; “You have to admire Hilaria Baldwin’s commitment to her decade-long grift where she impersonates a Spanish person”, went viral. She was also caught in videos where she was seen speaking with varying levels of accents and even supposedly forgetting the English word for “cucumber”.

After the thing went over the surface, on December 27, 2020, Baldwin took to Instagram explaining the accusations about pretending and faking to be Spanish. She stated that she spent “some” of her childhood in Spain and “some” in Massachusetts, but had never been enrolled in school in Spain, only spending time there during family holidays.

Struggled with anorexia nervosa and bulimia

Back during her high school days in her early 20s, she struggled with anorexia nervosa and bulimia. At that time, she had her nails brittle, hair falling out, the period being MIA, and no energy within her at all. She felt miserable and separated to feel better later started getting better when she started thinking of weight and health separately.

Having an interest in fitness and health since her childhood, Baldwin opened a yoga studio “Yoga Vida” in the West Village of New York City, as soon as she graduated from her university. She herself is a fitness freak who favors yoga over gym works. With her hard work and immense work, she has managed to branch her yoga studio to other 4 locations in the state itself.

She even shares different workouts carried out at home with no heavy equipment making it look all easy. She recently released her own workout DVD, called “Home with Hilaria Baldwin: Fit Mommy-to-Be Prenatal Yoga”.

Hilaria also handles her verified Instagram account: @hilariabaldwin which has over 865k followers worldwide. She has also been given the name of “reigning queen of Instagram” often for her appearance on Instagram with several pictures including everyone in her household, including the pets, which are accompanied by cute captions.

She also has a great fashion sense as she constantly is seen dressing up in fashionable outfits and dresses attracting more audiences. She looks great and poised in most of her photos but not in all as she often uploads photographs of her kids and herself getting messy and happy like anyone. She even takes any unfortunate events in stride.

Not only she is a wife, a mother, a yoga instructor, an Instagram personality but also a popular author. She has written the popular book titled “The Living Clearly Method”, which was released in December 2016. The book also features yoga sequences and healthy recipes geared toward busybodies like herself.

Her work was praised as she was even explained as someone who dives into her own struggles with eating disorders, stress, and injury, outlining the five principles: perspective, breathing, grounding, balance, and letting go.

“Hilaria Baldwin” is actually the celebrity name of her as her actual real name is Hillary Hayward-Thomas. Born as one of the two children to her parents; Dr. Kathryn Hayward and David Thomas Jr, her name was after her father’s surname. She has a White ethnicity while she spent her early time traveling from Spain to the US where she grew up. She has a brother named Jeremy Hayward-Thomas.