Carl Paul Nassib famed as Carl Nassib is an American football defensive end who is playing for the current team, as Vegas Raiders of the National Football League (NFL). His shirt/jersey number is 94. He was selected by the Cleveland Browns in the third round of the 2016 draft. He has also played for the Tampa Bay Buccaneers. On 27th March 2020, he signed a three-year, $25 million contract with the Las Vegas Raiders. He played college football at Penn State University. He won the Lombardi Award in 2015 after setting the school record with 15.5 sacks. He was a two-time Academic All-American. As of 21st June 2021, he became the first active NFL player to publicly come out as gay.

Carl Nassib of Las Vegas Raiders announces he is gay

Las Vegas Raiders defensive end Carl Nassib on Monday (21st June 2021) became the first active NFL player to come out as gay. Nassib, 28, made the announcement in an Instagram post. “What’s up people?” Nassib posted. “I’m at my house here in West Chester, Pennsylvania. I just want to take a quick moment to say that I’m gay. I’ve been meaning to do this for a while now, but I finally feel comfortable enough to get it off my chest. I really have the best life, I’ve got the best family, friends, and job a guy could ask for. “I’m a pretty private person so I hope you guys know that I’m really not doing this for attention. I just think that representation and visibility are so important. I actually hope that one day, videos like this and the whole coming-out process are just not necessary. But until then, I’m going to do my best and do my part to cultivate a culture that’s accepting, that’s compassionate and I’m going to start by donating $100,000 to The Trevor Project.” The Trevor Project provides crisis intervention and suicide prevention services to the LGBTQ+ community. It commended Nassib’s announcement, saying in a statement that his donation will help it “scale our life-saving crisis services to reach the more than 1.8 million LGBTQ youth who seriously consider suicide each year in the U.S.” Said Nassib: “They’re an incredible organization, they’re the No. 1 suicide-prevention service for LGBTQ youth in America. And they’re truly doing incredible things. And I’m very excited to be a part of it, help in any way that I can and I’m really pumped to see what the future holds.” In a statement, NFL commissioner Roger Goodell said the league “is proud of Carl for courageously sharing his truth today.” James Franklin, Nassib’s former coach at Penn State, said, “Carl’s brave announcement will forge a path for others to be true to their authentic self. I was proud of Carl when he led the nation in sacks, but I’m even more proud of him now.” GLAAD, an LGBTQ advocacy organization, called Nassib’s announcement “a historic reflection of the growing state of LGBTQ visibility and inclusion in the world of professional sports.” He joined the Raiders in 2020 on a three-year, $25 million free-agent deal, with $16.75 million guaranteed. He had 2.5 sacks and an interception in 14 games, with five starts, for Las Vegas last season. 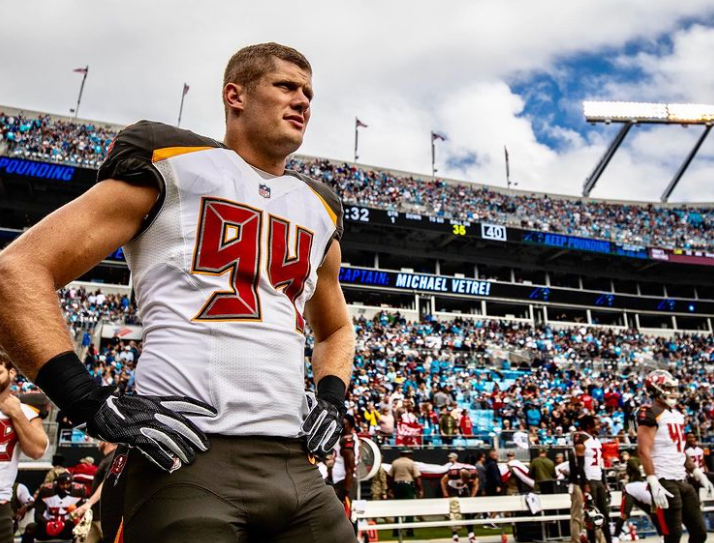 Who are the Parents of Carl Nassib?

On 12th April 1993, Carl Nassib was born in West Chester, Pennsylvania, the USA which is his birthplace. His real name is Carl Paul Nassib. By nationality, he is American and his ethnic background is American-White. His race is White. He is the son of Mary (mother) and Gilbert Nassib (father). His father played college football at the University of Delaware. He experienced his childhood with his four siblings; two brothers, John and Ryan, and two sisters, Carey and Paige. Ryan, who is three years older, played college football for Syracuse University and was a quarterback in the NFL, and is currently a free agent. Aries is his Zodiac sign and he is Christian by religion. His age turned 28 as of April 2021.

About his education, Carl attended Malvern Preparatory School (Malvern, Pennsylvania) and then went to Penn State University for further education. 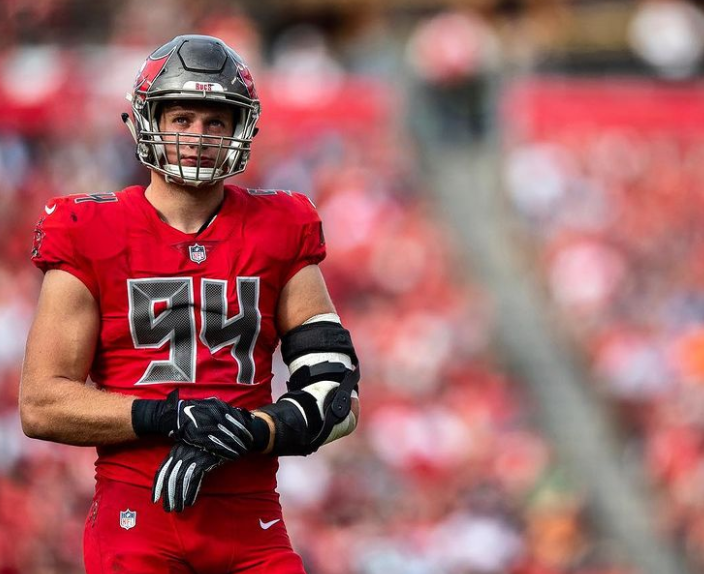 On 21st June 2021, he released a statement on his Instagram account stating that he is gay, becoming the first active NFL player to come out publicly. He also commented as part of this statement that he would be making a $100,000 donation to The Trevor Project, an organization dedicated to crisis intervention and suicide prevention among LGBTQ youth, and would continue to champion their work. He likes to keep his personal life private hence information about his dating life is not available at the moment. It is therefore not known whether he has a boyfriend or not. There aren’t any rumors about his past affairs or relationships in the media yet. His sexual orientation is gay. He is enjoying his present life happily and he is focusing on his career as well.

What is the Net Worth of Carl Nassib?

How tall is Carl Nassib?

Carl Nassib, an athletic footballer stands tall at the perfect height of 6 ft 7 in or 2.01 m. He has well-maintained bodyweight of 275 lb or 125 KG. His hair color is brown and his eye color is pale green. He has got very attractive body measurements. Overall, he has got a healthy body.