If we talked about the 80s and 90s, it was the period when the music industry had a drastic changed. And also brought a huge fusion of music genres with a modern touch. If we have to talk about the popular singers of that time than we should not miss out the popular personality Cyndi Lauper. She has spanned her 4o years in the entertainment industry and is still actively performing.

Moreover, she debuted her music career with her first album ‘She’s So Unusual’ in 1983. Her career, in the beginning, had a rough start, however, her first debut solo album became a worldwide hit. The four songs from her debuted album took the four positions on the Billboard Hot 100. Further, she became a first female artist to record her four songs in four positions out of top-five in Billboard. After that, she has sold her 50 million albums and 20 million singles. Besides singing, she has actively served as an actress, songwriter, and also an activist.

Cyndi was born as Cynthia Ann Stephanie Lauper on 22 June 1953 in New York City, the USA. She was born as the middle child to the Catholic parents Fred and Catrine Lauper. When she was just five years, her parents separated and got a divorce. She has two siblings; older sister Ellen and younger brother Fred.

She grew up in Ozone Park while listening to the songs of ‘The Beatles’ and ‘Judy Garland’. From an early age, she built interest in singing and composing. So, by the age of twelve, she started to compose and play an acoustic guitar given by her sister. Later on by the help of a friend she spelled her name ‘Cyndi’ instead of ‘Cindy’. Due to her eccentric clothing and hair coloring, her classmates bullied her and even threw stones at her. In addition, she attended Richmond Hill High School but after some time, she got expelled. However, she completed her study and received a GED.

At the age of seventeen, she fled to Canada to escape from her abusive step-father and also intend to study art. After spending two weeks in woods with her dog sparkle, she traveled to Vermont. Then she joined Johnson State College to pursue art classes. Further, she did a variety of odd jobs to support herself financially.

In the 1970s, she got herself to join various cover bands as a vocalist. Although she was not happy singing covers, in 1977, she damaged her vocal cords and took a year break. Further, she was told that she can never sing again but the help of vocal coach Katie Agresta, she regained her voice. However, her career start was rough, after her debuting her solo album in 1983, he began to gain a successful career. Her other discography includes 1986 ‘True Colors’, 1989 ‘A Night to Remember’, 1993 ‘Hat Full of Stars’, 2003 ‘At Last’, 2010 ‘Memphis Blues’, and 2016 ‘Detour’, amongst many.

Her other recognized works include appearing the covers of magazines like Rolling Stones, Time, VH1, and Newsweek, among many others.

Coming over to the personal life of the singer, she is happily married to boyfriend turned husband David Thornton. The couple started their married life on 24 November 1991. Looking at a brief on David Thorton, he mostly appears on the television dramas and series. He was born on 12 June 1953 which is 10 days later after Lauper’s birth which makes 10 days older to him. He was born to the international authority on the Scottish poetic father, Robert Donald Thorton who also taught English at Harvard over four decades. Further, Thorton’s career took off in the year 1983, in the same year, his wife’s debut album released.

Moreover, the couple together had welcomed their only child Declyn Wallace on 19 November 1997. The bond between the couple seems very strong as of now there is no news on their separation or extramarital affairs. 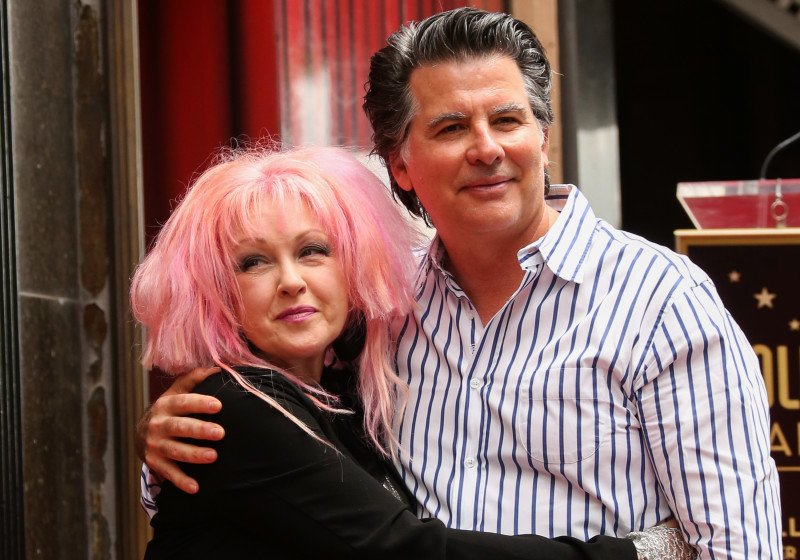 As an activist, she highly advocates LGBTQ rights and communities. She also involved highly in campaigning for equality from different charities and gay pride events. She has also dedicated her song ‘Above the Clouds’ for a Matthew Shepard who was beaten to death only because he was gay. Further, she is also a board member of the Matthew Shepard Foundation and devoted her 2005 concert tour in promoting the Foundation’s message.

In 2007, she co-founded the True colors tour for Human Rights and one dollar from each ticket, she embarked for the Human Rights Campaign. In 2010, she launched True Colors United in which to get more help from straight people to involve in LGBT rights.

The award-winning singer has sold over 50 million albums and 20 million singles. Therefore, she has amassed a huge amount of money from her vast career as a singer-songwriter, actor, and activist. She has a net worth estimated at $30 million. However, her monthly income has not revealed in the media. Additionally, many people recognize her for unique fashion featuring different hair colors and eccentric clothing.

The singer has a slim body type that has an average height of 5 feet 3 inches or 1.60 meters. Her body has a measurement of 33-24-33 inches and weighs around 50 kg. She has a green eye color and blonde hair color.