Josh Swickard is an actor and model from the United States. Since 2010, he has entered the industry as a model and currently represents the Wilhelmina Models in Los Angeles. He has appeared in several magazine covers including Oh Lala Magazine and music magazine, Q.

Besides his modeling career, he has made an active career as an actor as well. He started out as a guest appearance and worked in a few films and series. However, he gained fame from his regular role as Harrison Chase in the ABC soap opera General Hospital. Further, he also made headlines for marrying co-actress, Lauren Swickard. Let us scroll over to know more of his details in personal and professional life.

The model was born on 4 July 1992 as Joshua Swickard in Quincy, Illinois.  He is the son of his parents, Bob and Gina Swickard. His father worked as a senior pastor at Belleville based St. Matthew’s United Methodist Church whereas her mother, a vocal coach. Further, he has three sisters: Elyssa Carlisle, Kalia, and Elayna Swickard. In addition, Josh is a descendant of Daniel Zwigart, who arrived in Philadelphia, Pennsylvania in 1765 on the ship Betsy.

Regarding his education, he completed his schooling at Glenwood High School. Then he attended the College of DuPage and graduated study accounting for 2 years. Following that, he also did modeling aside and modeled for about 6 years in Chicago.

He started his career as a model and managed by Factor Chosen Chicago initially and then signed Wilhelmina Models. In 2010, he entered the modeling industry appearing in the Oh Lala Magazine and Q in 2013. After that, he tried out in the acting and appeared as a football guy in an episode of K.C. Undercover in 2015. In the same year, he worked in the recurring role of Todd Stetson in the television series ‘Liv and Maddie’. His other projects include 2018 ‘School of Rock’ and 2020 ‘A California Christmas’.

Moving toward his personal life, his followers may know that he is not available at the moment. He is a married man and exchanged rings with her long-time girlfriend, actress Lorynn York. She widely recognized as Lauren Swickard also represents herself as a writer and producer and has written and sold multiple original screenplays. Her recent appearance was in 2020 ‘A California Christmas’ as well as its created, wrote, produced.

Furthermore, the duo married on 6 July 2019 after their engagement in December 2018. Currently, the couple shares a blissful married life with each other. The couple recently posts a picture holding a pregnancy test on Instagram and captioning exciting for the next chapter on 17 February 2021. In addition, he has not involved in any kind of controversies or rumors. 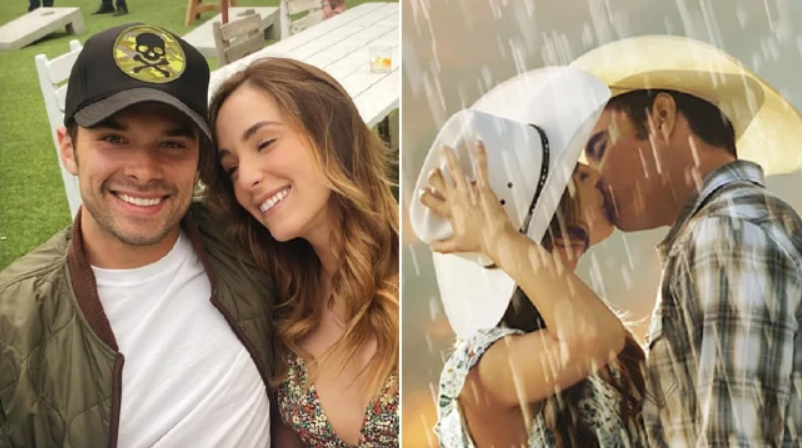 Speaking of his learning, he has been making a lot of money from his career as a model and actor. His net worth has an estimation of around $1.5 million. However, he has not discussed his income. Additionally, the average earning of models range between $32000 to $48000 based on their popularity and tenures. As for actors, they can be paid an average of $52,000 yearly or more.

He is highly active over different social media platforms with verified accounts. On Instagram, he goes by the handle @joshswickard with 158k followers. He has an account @josh_swickard with 22.4k followers. But he is not active on Facebook.

He has a slim and athletic body structure that stands to a height of 5 feet 7 inches or 1.70 meters. His body weighs around 70 kg with 38 inches chest size, 32 inches waist size, and 16 inches biceps. Further, he has hazel eyes and brown hair.