Luka Sabbat is popular as an actor, model, and fashion designer. Along with his career in the entertainment industry, he has also fixed his eyes on art as well as emerged as an entrepreneur. As a model, he has posed for top brands and magazines including Vogue, Complex, Hugo Boss, Adidas, and Tommy Hilfiger.

He started his modeling journey after he discovered SoHo by Kevin Amato and soon signed the modeling agency ReQuest Model Management. Additionally, Sabbat made his acting debut in 2018 by portraying Luca Hall in the sitcom ‘Grown-ish’. Moroever, the young model was rumored to be in a relationship with Kourtney Kardashian who is 19 years older than him. Let us together scroll below and find out the facts. 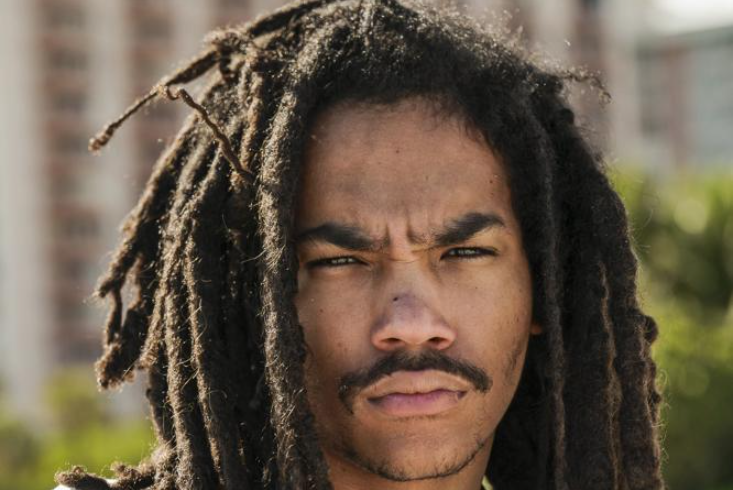 The multi-talented young personality was born on 26 November 1997, in New York City, New York, the United States. He is the son of Clark Sabbat and Jessica Romer both of them belong to the fashion industry. His father is a renowned fashion designer who works as a freelancer and has associated with Ann Taylor and Loft. Wheres her mother is a former fashion stylist, now works as a chief.

Furthermore, he has a half-brother named Lynn Levoy from his father’s side. As a kid, he had spent some years in Paris. He has a mixed ethnicity of Irish, English, German, and Haitian. He once revealed that he did not have much interest in the fashion world as his parents come from a fashion background until he was discovered. Regarding his education, he had graduated from Lower Manhattan Arts Academy in 2015. He then went to attend college but dropped out even after the first-semester finished.

In a very short period, he garnered a lot of attention from the media as well as the public. He began his modeling assignment after signing ReQuest Model Management after meeting the owner of the management agency. He did many gigs including an opportunity to walk the runway for Kanye West’s ‘Yeezy Season 1 Presentation’ show at 2015 New York Fashion Week. At the present, he serves as the artistic director of a project named ‘HotMess’.

Moving toward his personal life, at the moment, he might be single or sharing a secret relationship with a beautiful woman. As he has kept his personal affairs away from the media. The 23-years-old (as of now 2021) has been in a relationship with a few girls previously. His past dates include a young Australian woman Dani Stani(2014) and Costa Rican model Adriana Mora(2017). His name also linked to another model, Kaia Gerber but no information on the news.

He was rumored to have a relationship with 19 years older than him, Kourtney Kardashian in September 2018. The speculations came when he was spotted with television personality and socialite Kardashian having dinner together at The Nice Guy, an Italian restaurant in Los Angeles. However, Sabbat later confronted saying they are not dating.

He surely makes a lot of income through his various business ventures that help to live a lavish lifestyle. He has collaborated with Gianni Monini and released an Italian jewelry designer LUKA X MONINI line. The brand sells products including earrings, pendants, bracelets, necklaces, and rings. Also, he created a clothing line named Sabbat X RLTD along with his father and donates its price money for the benefit of charity Help Haiti. Therefore, he has a net worth estimated at around $3 million from his works.

He is highly active over different social media platforms with verified accounts. On Instagram, he goes by the handle @lukkasabbat with 2.5 million followers. He has an unverified Facebook account under his name with more than 19.1k followers. On Twitter, he goes by the account @whoisluka with 407.4k followers.

He has an average looking body structure with a height of 5 feet 11 inches or 1.78 meters and Weighs around 68 kg. There is no information on his body measurements of chest, waist, or biceps. He has black eyes color as well as hair color. The actor has also inked in many parts of his body including eve tattoo on his stomach and sword on his both hand.