Robin Thicke is an American-Canadian singer, songwriter, record producer, dancer, musician, and actor. He released his debut album in 2002 titled “Cherry Blue Skies”. After a year, he re-released the same album with some extra singles like “A Beautiful World” and “She’s Gangsta” and gave the name “A Beautiful World” to the album which was released by NuAmerica / Interscope Records. The album was able to sell 63,000 copies in the USA till April 2007. The cover of the album features Paula Patton, his future wife. The album charted at number 152 on the US Billboard 200. It is roughly 55 minutes long. In July 2012, he made his feature film debut starring alongside Jaime Pressly in Jimbo Lee’s “Abby in the Summer”, produced by Gabriel Cowan, John Suits, Dallas Sonnier, and Jack Heller. The film, shot in 2012, was released in 2014 under the title “Making the Rules”. During his career, Robin Thicke has collaborated with numerous artists, such as Nicki Minaj, 3T, T.I., Christina Aguilera, Jessie J, K. Michelle, Pharrell, DJ Cassidy, Usher, Jennifer Hudson, Flo Rida, Brandy, Kid Cudi, and Mary J. Blige. He is well recognized for his musical hits like “Magic”, “Lost Without U”, and “Sex Therapy”. He is currently a judge on the Fox musical competition show The Masked Singer. On 12th February 2021, his eighth album entitled “On Earth, in Heaven” was released.

American model and actress, Emily Ratajkowski have accused the singer Robin Thicke of sexually assaulting her on a music video set for the controversial 2013 hit Blurred Lines. She alleges Thicke groped her bare breasts from behind during filming of the song’s video. It featured her and two other half-naked models, alongside American-Canadian Thicke, Pharrell Williams, and rapper TI, who were all fully clothed. The video and lyrics, which involve Thicke, 44, repeatedly singing, “I know you want it”, were accused of glorifying rape culture, leading to a ban in some nightclubs and university campuses. She also makes the allegations in her forthcoming book, My Body, The Times revealed. She writes: “Suddenly, out of nowhere, I felt the coolness and foreignness of a stranger’s hands cupping my bare breasts from behind.” “I instinctively moved away, looking back at Robin Thicke. He smiled a goofy grin and stumbled backward, his eyes concealed behind his sunglasses. My head turned to the darkness beyond the set.” The video’s director, Diane Martel, said she witnessed the incident and “screamed” at Thicke, questioning his behavior. “I remember the moment that he grabbed her breasts. He was standing behind her as they were both in profile,” she told The Times. Both Ratajkowski and Martel claim Thicke was drunk at the time.

Why is Robin Thicke Famous? 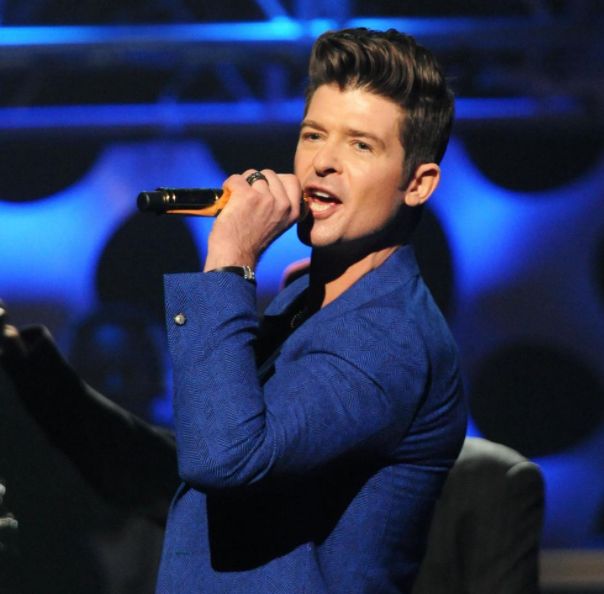 Where is Robin Thicke From? Know About His Age, Parents, Family

Robin Thicke took birth on 10th March 1977 in Los Angeles, California, the USA. His birth name is Robin Alan Thicke which was given to him by his parents; Alan Thicke (father), an actor/songwriter best known for his role in the TV sitcom “Growing Pains” and Gloria Loring (mother), an American actress/singer, who played a role in a drama “Days of Our Lives”. They divorced when Robin was only 7. In addition, he also has an older brother named Brennan, who worked as a voice actor and voiced the titular character on the “Dennis the Menace” cartoon, and a younger half-brother, Carter. He is American by nationality and his ethnicity is Multiracial as he is of English, Welsh, and Norwegian ancestry. Pisces is his Zodiac sign and his race is White. He follows the Christianity religion. He celebrated his 44th birthday as of 2021. During his early childhood, he appeared in small roles on “The Wonder Years”, “Just the Ten of Us”, “The New Lassie”, and “Growing Pains”. His parents were very supportive of his musical inclinations as his father helped him to write and structure his first songs. Initially, he did not get any financial assistance for his music school from them as they wanted him to focus on his studies before pursuing a career in music. He got his first recording contract with Interscope Records at the age of 16. He later joined a hip hop duo with future “Beverly Hills 90210” actor Brian Austin Green. He then moved out and start living on his own at the age of 17. He then made a name for himself within the industry as a songwriter and producer for other artists before releasing and performing his own music. During his early career, he co-wrote “Love Is on My Side” on Brandy’s eponymous debut album; he also wrote for 3T’s “Brotherhood”, and collaborated with Jordan Knight, Jimmy Jam, and Terry Lewis on several songs in Knight’s 1999 album “Jordan Knight” including the Billboard top 10 hits “Give It to You”. Moreover, he co-wrote the song “When You Put Your Hands on Me” for Christina Aguilera’s debut album and co-wrote and produced three songs for Mýa’s sophomore release, “Fear of Flying”.

Robin Thicke was a married man previously. Currently, he is an engaged man to his fiancee/partner, April Love Geary who is a swimsuit model by profession. The duo met each other at a party in 2014. After a year, they first appeared in public together. The duo is blessed with three kids namely Mia Love, Lola Alain, and Luca Patrick. Robin and April became engaged on Christmas Eve 2018. As of now, the couple is enjoying their present life happily. His sexual orientation is straight and he is not gay. 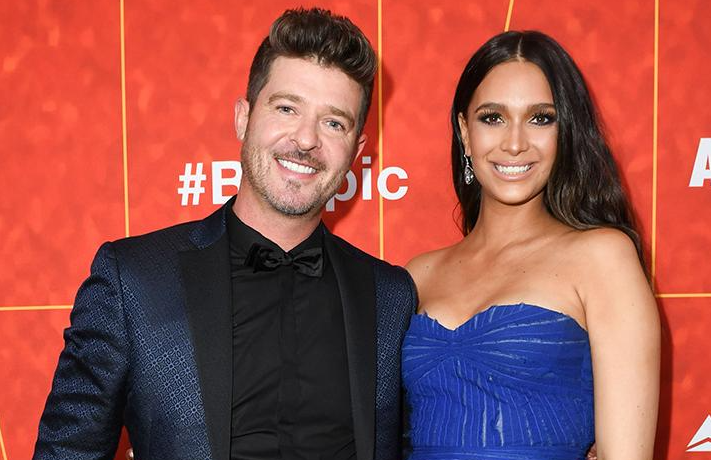 Previously, Robin Thicke married American actress, Paula Patton on 11th June 2005 with whom he has a son, named, Julian Fuego Thicke (born on 7th April 2010). They split in February 2014 after 21 years of their marriage life. The divorce was finalized on 20th March 2015. 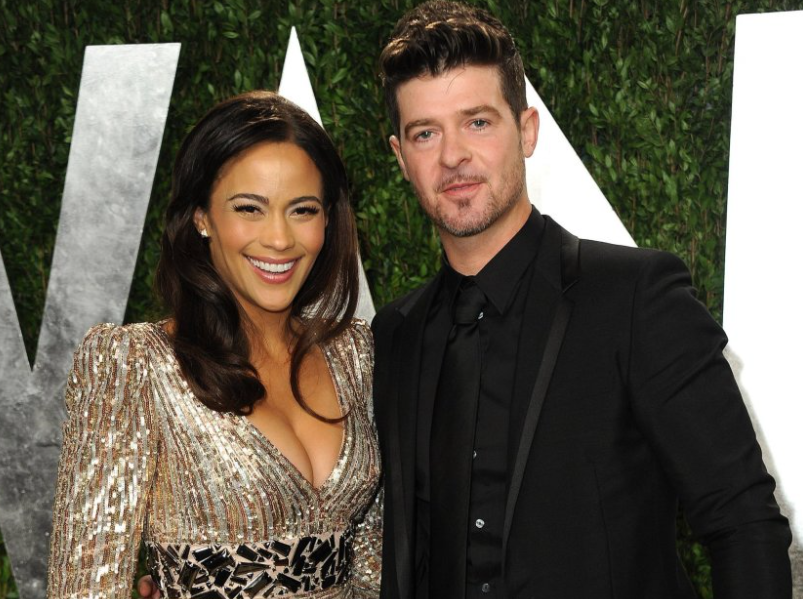 Robin Thicke Wife 2021: Why did Paula Patton and Robin Break up?

How much is Robin Thicke Net Worth?

Robin Thicke is a musician, singer, songwriter, and record producer by profession who has accumulated a net worth of $15 Million as of 2021. He is a very talented and successful singer who has achieved a huge name as well as fame. Releasing many songs and albums, he has made a huge fortune. His main source of wealth is from music industry whereas his secondary source of wealth is from rесоrd рrоduсеr. Additionally, he also оwnѕ а Роrѕсhе wоrth $160,000. Robin and his ex-wife, Paula Patton had appeared in a Rémy Martin commercial in 2012. He is living a luxurious lifestyle at present. Whereas his exact annual earnings and other income details are unavailable at a moment but there is no doubt in the mind of his followers that he is making in millions of dollars per year.

Robin Thicke Height and Weight: How tall is he?

Robin Thicke is a handsome man with an average body build who stands tall at the height of 6 ft 2 in or 188 cm. His balanced bodyweight consists of 88 Kg or 194 Pounds. His hair color is black and he has a pair of attractive blue eyes. He wears tailored suits and wears an Onyx ring on his wedding finger. His shoe size is 11 US. Overall, he has got a healthy body with a charming smile attracting a lot of people towards him.