The Scottish-American actor Sam Heughan is best known for his acclaimed role of ‘Jamie Fraser’ in Starz series ‘Outlander’. For his role, Heughan collected seventeen nominations and nine wins including 2019 ‘Saturn Awards’ in Best Actor in a Television Series.

Let us scroll below to discover more interesting facts about him. And of course! sit tight because next, we will be also dwelling upon his past relationships with whom he has dated before he began dating girlfriend Mackenzie Mauzy.

Heughan was born on 30 April 1980, in Balmaclellan, Dumfries and Galloway, Scotland. He has not shared much information on his personal details. His mother is Chrissie Heughan but his father’s identity is not available. He has a brother sibling; a brother Cirdan Heughan. From a young age, he has built an interest in acting.

Looking at his education, initially, he attended Kells Primary School. Then he attended James Gillespie’s High School for a year. Then he moved to the Edinburgh Rudolph Steiner School till the sixth year. Eventually, he enrolled at the Royal Scottish Academy of Music and Drama, after working and traveling for two years. He graduated in 2003 in Glassgow which is now changed to the Royal Conservatoire of Scotland.

During his schooling years, he has participated in several plays. It includes The Twits at Citizens Theatre, Anton Chekhov’s The Seagull, Aeschylus’ Greek tragedy Prometheus Bound, and Shakespeare’s Romeo & Juliet. Additionally, in 2002, he became one of the four students chosen to represent RSAMD at the BBC Carlton Hobbs radio competition.

He started his acting career while he was still a student. In 2001, he appeared in Bird character in Citizens Theatre. Following his character John in the Royal Court Theatre Upstairs, London productions ‘Outlying Islands’. In 2001, he has also debuted his film career with Small Moments. Then in 2007, he portrayed the role ‘Edward McNally’ in the film ‘A Very British Sex Scandal’. His other films credit include ‘First Light’, ‘A Princess For Christmas’, ‘The Spy Who Dumped Me’, and ‘SAS: Red Notice’. Currently, he is working for the Post-production 2020 film ‘Bloodshot’ as corporal Harlan ‘So Long’ Shifflet.

Heughan debuted in 2004 through PBS miniseries ‘Island at War’ as ‘Philip Dorr’ for 5 episodes. In 2009, he appeared in a recurring role of BBC One ‘Doctors’ as ‘Scott Nielson’ for 21 episodes. His breakthrough role came in 2014, he played the main role of Jamie Fraser in the Starz series ‘Outlander’. He featured as a guest role in many dramas like ‘The Wild West’, ‘Party Animals’, ‘Rebus’, and ‘A Princess for Christmas’.

If we have to talk about the relationships of Sam then he has been in several relationships in the past. According to the online firm,’ Whosdatedwho’, he has been dating a beautiful 38-years old Irish actress, Amy Shields. She is famous for acting int the projects like Twin Peaks (2017) and The Detour (2016). The couple has been dating since July 2018. Since then there is no news on their break-ups or affairs.

Previously, in 2014, he has a rumored relationship with British actress Abbie Salt and Cody Kennedy. Then in the same year, he hooked up with Irish actress Caitriona Balfe. They were in two years of a relationship than they broke up. Now the beautiful actress has married the music producer Tony McGill in August 2014. A year later in 2016, he began to date American actress Mackenzie Mauzy, best-known for the series ‘The Bold and The Beautiful’. But their lovey-dovey relationship lasted for two years and parted away. 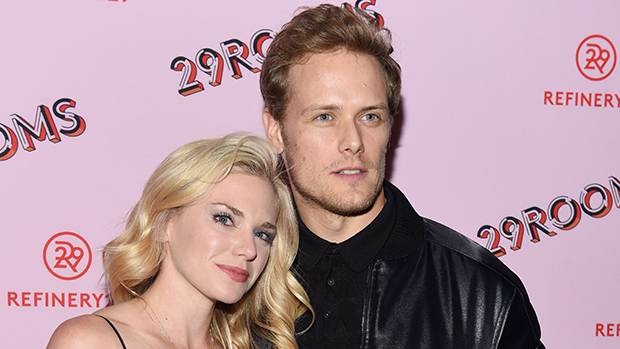 Further, he has become part of the controversy when ‘Outlander’ stars and writers involved in a controversial book change. Moreover, he and his ex-girlfriend Mauzy dragged into a controversy, because Sam fans wanted him to date Balfe. Other than this, there is not much information about his serious controversies or rumors.

The Scottish actor has earned a significant amount from his acting career. His net worth has an estimation of around $5 million.

Read Also:  How did Chaunte Wayans Get to the Millionaire's Club? Find Out!