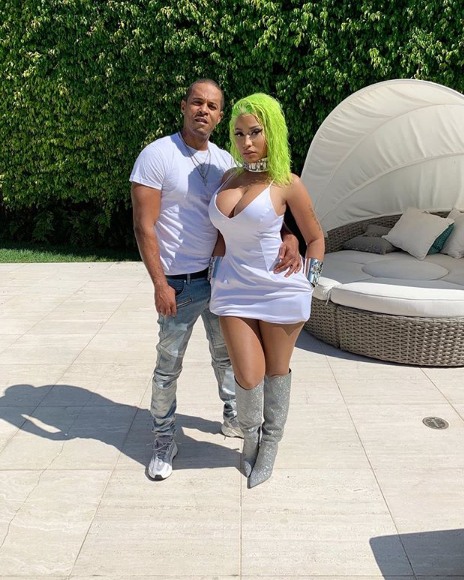 Nicki Minaj, the rapper, 36 is married to her fiance, Kenneth Petty, 41 after nearly a year of dating. Minaj announced of her marriage with Petty on her Instagram post late Monday night October 21, 2019. Nicki, considered to be the “Queen of Rap”, is the most influential female rap artist of all time in the music industry.

Born in Trinidad and Tobago as Onika Tanya Maraj, Minaj has never let her fans down when it comes to her personal life(boyfriend). Minaj has been open about her dating history since her first boyfriend rapper, Safaree Samuels.  Minaj was very much open about her relationship with Kenneth “Zoo” Petty. Petty and Minaj initially met in their hometown, Jamaica Queens.

But still it is uncertain when the couple exactly started dating but Minaj made it public in December 2018 through a couple-photo on Instagram. Minaj used to frequently post pictures with Petty on her Instagram and was very much serious about her relationship with Petty then.  But photos of their secret marriage event and her bridal photos are not out yet.

Minaj shared the special event of her life to her fans and loving ones about being married to her boyfriend, Kenneth Petty through an Instagram post. On Monday night of October 21, 2019, Minaj announced that she was officially married by sharing a beautiful bliss with a video that showed two matching cups and two matching baseball cap scripted with Mrs.(cup), Bride(white cap), Mr.(cup) and Groom(black cap) respectively.

Minaj captioned the video, “Onika Tanya Maraj-Petty 10•21•19,” which was the announcement of the newlywed couple’s official wedding date. Minaj even had updated her Twitter account to “Mrs. Petty” earlier the week

Who did Nicki Minaj Marry?

Petty is a 46 years old guy with a large history of criminal activities. He is a registered level 2 sex offender and a convicted murderer. Petty has served several years in prison for his convictions. Petty first served his days in prison for first-degree attempted rape for a 1994 assault in April 1995. He served 4 years in prison and was released in January 1999.

Later in 2006, Petty was convicted of first-degree manslaughter. He served 7 years in prison before he was released in May 2013. Petty was assessed as posing a medium risk of community another offense as well. Petty gained attention only after he started dating Minaj.