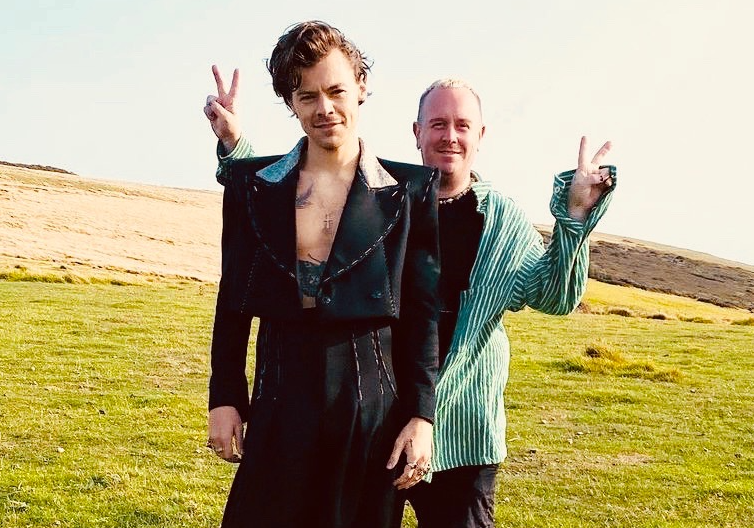 Whenever there’s any sort of award ceremony, fashion event, or any celebrity appearance show, the one thing that all the fans and audience are eager to look forward to is the celebrity’s dress-up style. Talking about the dress-up style, it’s next to impossible not to mention the former One Direction member Harry Styles, who has dominated not just the music industry but also the fashion world with his distinct fashion sense.

No one dresses up like Harry does in his internet-breaking cardigan, making his fashion sense a one-of-a-kind phenomenon in recent years.

Just recently Styles achieved one of his milestones by appearing on his very own cover of Vogue for December 2021. Well, all eyes are now fixed up upon him but it appears like Harry’s stylist who has remained behind the camera for years now has snatched the spotlight.

The stylist behind Harry’s sensational fashion style is a good friend of his with the same first name as him, Harry Lambert. Let’s get to know more about Harry but Lambert.

Who is Harry Lambert?

Harry Lambert is a popular British fashion stylist who has been working in the fashion industry for years. His works have changed many people’s perspectives towards today’s gen-z fashion sense mixed with classical vibes.

Lambert is behind all of Harry Styles’s phenomenon dress-ups that we could see while he attended any red carpets to annual music awards including the Grammys Award 2021, Brit 2021, and now the cover of Vogue.

He just recently posted outfit details of STyles on his Vogue cover shoot on his Instagram stories which has caused a collective meltdown in the fashion world now.

Looking back at Styles’ blowing fashion looks now for over 5 years, he is one of Lambert’s most famous clients as Lambert regularly shares snaps from the singer’s photoshoots and commercial projects on his Instagram. And well he is doing pretty good looking back.

Apart from his work with Styles, Lambert has worked with several companies including Topshop, Topman, Tommy Hilfiger, Asos. With his upgrowing popularity, he has garnered over 608k followers on his verified Instagram account: @harry_lambert.

Who does Harry Lambert work for?

Growing up a couple of hours’ drive from London in Norwich, Harry Lambert recalls all of his childhood spent much time developing a deep-seated love for clothing rather than just taking fashion as an industry. He loved fashion as he found joy in it rather than obsessing over what he wore and dressing the mannequins at his local charity shop at all.

He once said in an interview; “I was never one of those people that can say, ‘Oh my god, I was flipping through issues of Vogue every day,’”

Lambert always learned to live at a moment which also helped him with his career as he loved listening to Madonna’s songs that his mum used to play all the time.

“the only thing I could think of is my mum used to play me a VHS tape of Madonna’s music videos, like all the time.”

Desiring to pursue his dream career, he went to UCCA Rochester university where he majored in photography alongside the fashion department.  It was there that Lambert found friends who coaxed him out of his shell and an introduction to the huge but small fashion world. He started off working alongside his buddy stylist in charity shows trading their work in editorial imagery just for access to an impressive collection of vintage. He said;

“It started blossoming from there, really. That’s where I started to realize that this is something that I could do potentially as a job.”

After two and a half years assisting a menswear stylist, Lambert’s career began to take shape the way he always wanted it to be and now he works with several celebrities including the two phenomenal personalities; Emma Corrina and of course, Harry Styles, each of whom is making some of the most exciting fashion choices.

Looking all of his works, it is pretty clear that his work excites him that even the pandemic COVID_19 couldn’t stop him and he went on to design more and more styles for his clients. His personality sure is reflected in his marvelous works.

“I’m sitting here in my studio and I’m looking at eight crazy wigs for a shoot I’ve got this weekend. I’m just so excited to be able to start making fun, creative stuff again.”