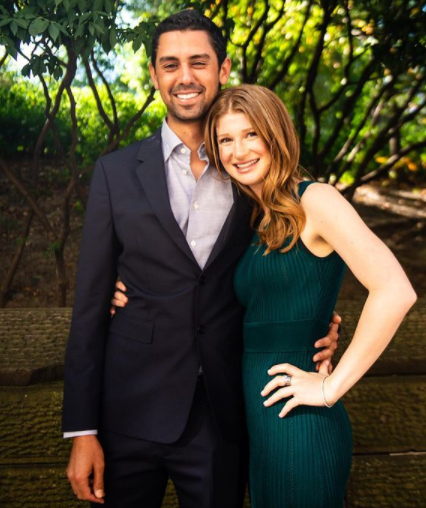 William Henry Gates III popularly known as Bill Gates, who is the principal founder of “Microsoft Corporation” and the second richest person in the whole world with a net worth of $105.8 billion has had a hard time navigating the year 2021 as he divorced his wife, Melinda Gates after 26 years of marriage.

But now it seems it was meant for good as in October of the same year 2021, his eldest daughter, Jennifer Gates, 25 got married to her long-time love, Nayel Nassar in a massive Muslim ceremony wedding costing $2 million.

Jennifer Gates who is more passionate about horse riding never let herself drown under her billionaire father’s shadow of wealth and luxury but tried her very best every time she got a chance including her perspective to take humanity over money supporting EQUUstar. Like a normal girl, she got her lifetime chance to wed her Egyptian-American equestrian fiance, Nayel Nassar at her 50-hectare horse farm in a massive wedding ceremony at North Salem on Saturday, after they reportedly exchanged vows in a smaller Muslim ceremony.

Gates wore a long-sleeved lace gown designed by Vera Wang Haute looking like a princess wearing her hair loose with a long veil with a white bouquet. Coldplay and folk musician Harry Hudson are reported to have played for guests at the wedding reception.

You must be more curious about who the lucky guy is to be getting married to the daughter of Bill Gates. In Jennifer’s engagement announcement post, she called Nassar “one of a kind” and raved about his romantic proposal.

Let’s get to know more about him now. 5 things about Bill and Melinda Gates’s son-in-law Nayel Nassar.

1. Nayel Nassar is a millionaire Egyptian-American.

Nayel Nassar was born in 1991 as one of the two sons of his Egyptian millionaire parents; Fouad Nassar and Iman Harby in Chicago, United States. Growing up, he spent his formative years in Kuwait, alongside his brother named Sharaf Nassar, where his parents own an architecture and design firm.

Founded in 1987 in Kuwait, the firm is one of the leading firms in the sector with hundreds of projects run over more than three decades worth of multi-million dollars. It is reported that Nassar has an estimated net worth of US$100 million as of 2021.

2. He is an award-winning equestrian.

Nayel is a popular equestrian who has been competing in equestrian competitions for several years. He developed an interest in the field by the age of 10 and even won his first FEI Grand Prix in Abu Dhabi in 2011.

He represented Egypt at different international games even qualifying for the FEI World Cup Finals in 2013, 2014, and 2017, in addition to the FEI World Equestrian Games in 2014.

Nassar is also a three-time winner of the Hits US$1 million Grand Prix, and is the first rider to win both the Longines Speed Challenge and the Longines Grand Prix at the same event – and the first to do it with the same horse. His huge success came after he got qualified for the Tokyo 2020 Olympic Games after 60 years in Egyptian history.

Despite belonging to a millionaire family, he never stop himself from trying anything he ever wanted. Born in Chicago with Egyptian roots growing up in Kuwait, he moved back again to the US to study in California in 2009. He can speak three languages including Arabic, French, and English.

4. He graduated from Stanford University.

After returning to the United States in 2009, he began to study at Stanford University in Northern California. It was the same university that his wife, Jennifer also attended. He earned a degree in economics in 2013, while his wife graduated in 2018 with a degree in human biology. Both the couple is now alumni of Stanford.

5. He is also a businessman.

He not only just let his passion be a profession only but changed it into a business too. He started his stables called “Nassar Stables” in Southern California in 2014.

Just recently in August 2021, he launched an iOS app titled “Jumper” for the latest comprehensive showjumping statistics and analytics. The app was installed to allow riders, trainers, broadcasters, and fans to interactively search an indexed database to efficiently find information about the sport.