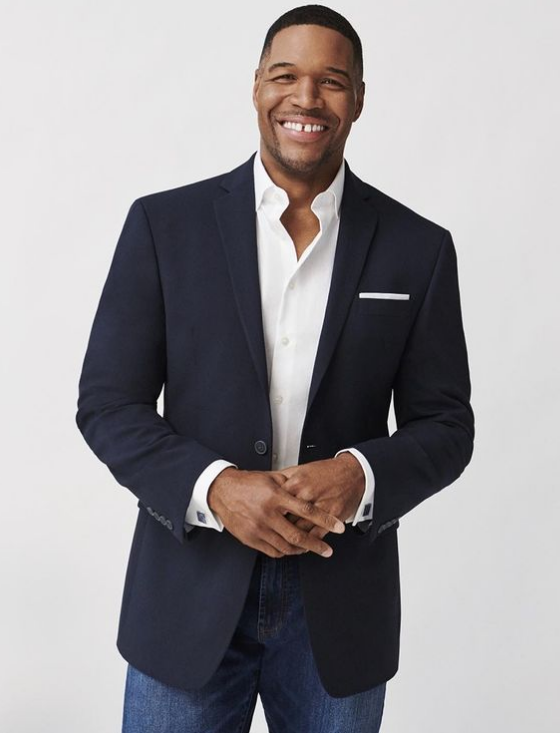 When it comes to the world of football and television shows, it will be unfair not to mention the name of Michael Strahan. Known for his defensive tricks in the football field where he spent his 15-years of life just playing for the New York Giants of the National Football League(NFL), is none other than Michael Strahan.

Also called out by the name of “Gap-toothed Gridiron Great“, Michael who was elected to the Pro Football Hall of Fame in 2014 retired at age of 36 in 2007, but it wasn’t the actual end of his life career as just after that he went on to become a beloved media personality nationwide. His recognition and popularity went on to peak at skyrocket height when Strahan began to appear on TV shows including “Good Morning America“, “The $100,000 Pyramid”, “Nickelodeon Kids’ Choice Sports”.

Working as the current host at “Good Morning America”, Strahan recently came upon the news when he began to show less appearance as he has been missing from his usual appearance on the show for several days. It’s however not so surprising, though, because he’s gone through a lot in the last several weeks after the passing of his longtime friend and former Giants coach, Jim Fassel, who died of a heart attack on June 8, 2021.

Here are the 10 things about Michael Strahan that you might not know.

1. Michael Strahan is a millionaire

With his career as a former professional football player and currently the journalist and television personality of one of the popular shows of the US, “Good Morning America”, Michael Strahan undoubtedly has managed to amass a wealthy fortune from his decade-long career. He also worked as a football analyst joining the Fox NFL Sunday show. Between 2012-2016, he also hosted “Live with Michael and Kelly”.

Without a doubt, he is a millionaire. Spending almost 15 years in the football league, Michael managed to gather roughly around $60 million throughout his career at NFL.

The 2002-2003 season was the high highest-earning season as that year his salary topped nearly $21 million. Today his salary from his current career as a host and TV personality is around $17 million. He also has his own clothing collection which he launched in 2015. Including which Michael currently has a million worth net worth estimated to be around $65 million.

2. He is in a stable relationship and was a married man

Michael has dated several women throughout the past years. Some of his dating relationships even turned into marriage as he has been married twice before. His first marriage was with Wanda Hutchins, a businesswoman, and owner of “Wanda Home Designs”, from 1992 to 1996. His most popular marriage his second one with Jean Muggli in 1999. He decided to get married to her just after meeting her at a spa. Their marriage ended up with an acrimonious divorce on July 20, 2006, with a settlement of $15 million and $18k monthly child support for Jean.

Two years later, he got engaged to Nicole Mitchel in 2009 but ended their engagement in 2014. After two unsuccessful marriages, Michael finally seems to be in a stable relationship with Kayla Quick. The pair are said to have been seeing each other since 2015 even though they have never come to the public together yet.

His ex-wife, Jean Muggli, alleged that Michael had cheated on her and that he was gay. It however was meant to be untrue, but following his divorce in 2006, he stayed unmarried and wasn’t rumored to be dating for several years, raising questions among his fans about whether he was indeed gay.

In 2012, Michael clarified all the rumors when he said:

“I think early on when you’re reading all these things in the paper that aren’t true — I’m not an adulterer. I’m not gay. I mean, I didn’t beat anybody”.

4. “Gap-tooted Gridiron Great” is his nickname

Known among his fans for being a footballer and his appearance on “GMA”, Michael Strahan actually is known for his signature gap in his teeth. It would be a waste if one has ever missed the signature gap giving him the iconic name, “Gap-tooted Teeth”. He however has never been ashamed of his gap teeth as he has even refused to get any dental work done which he could have easily done before.

He even makes fun of himself cracking jokes on his teeth as he once said on his Twitter: “I need some big diamonds. Have no fear gap mouth ho’s teeth jewelry is here”. Recently on April 1, 2021, he played an April fool trick on his fans when he confessed to them that he was looking to seal his gap teeth after years.

He broke his silence with the trick saying:

“Be you. Live the way you want to live. Do what makes you happy because I did and I’m happy that I did.”

5. He lives in heart of New York

He currently lives at his million-worth house located in New York, more precisely the Upper West Side. He loves the place where he is at that he often posts several pictures of his apartment on Instagram. His house in New York is quite close to his working place “Good Morning America” studio in Times Square.

When he was tested positive back in January 2021, he spent his time recovering at his New York-based house.

6. He is the youngest child of his parents

Born as the youngest child to his parents on November 21, 1971, Michael Strahan grew up alongside his 5 elder siblings; two sisters and three brothers. Both of his parents belong from the sports field as his mother, Louise Traylor Strahan was a basketball coach, while his father, Gene Willie Strahan was a retired Army Major and a boxer with a 1–1 record against future heavyweight Ken Norton. Through his parents, he was leaned towards the sports world at a young age developing an interest in football.

He is even the nephew of retired NFL defensive lineman Art Strahan. Growing up in his hometown Houston, Texas, he attended the Westbury High School and even played football organized football at Mannheim American High School(MAHS).

Through his two marriages before, he has already become a father of four. He first got the privilege of becoming a father when he welcomed his daughter, Tanita Strahan with his first wife, Wanda Hutchins on November 10, 1992. Three years later in 1995, he had a son, Michael Straha Jr.

With his second wife, Jean, Michael shared twin daughters, Isabella and Sophia born in 2004. Both of his twin daughters have a great lean towards modeling. Michael as a father has served well enough for his children he surely is a hero and the best father.

The question that every “GMA” viewers are asking if Michael Strahan has left the show due to his continuous absence on the show for a couple of weeks now. Many of his fans speculated what if he had left the show while some speculates that he wouldn’t leave without any official leaving announcements.

His absence on the show however seems to be quite clear since he went through a lot since past few months like he tested positive with COVID-19, lost his father, lost his pal and former coach, even had his ex-wife arrested, with which he surely needs some to time to heal and get through it.

As per his Instagram posts, he seems to be on vacation with his pet dog, Enzo. It seems to be appealing when he posted a photo of himself lounging on a sofa in a villa, with Enzo relaxing beside him alongside a caption which reads: “Enzo wants to know why I am working during vacation… the hustle doesn’t stop!”

He surely will be back on the show after his vacation.

9. He is an athletic 6ft. tall black man

With his profession as a footballer, Michael has surely managed to establish himself as an athletic man with a well-maintained body physique. His body physique has a measurement of 45 inches as chest, 36 inches as waist, and 36 inches as hip size. Not only his gap-toothed teeth made him popular but also his height which is around 6ft. 5inch.(1.93m). He has a body weight of around 116kg(256 lbs).

10. He belongs to the African ethnicity