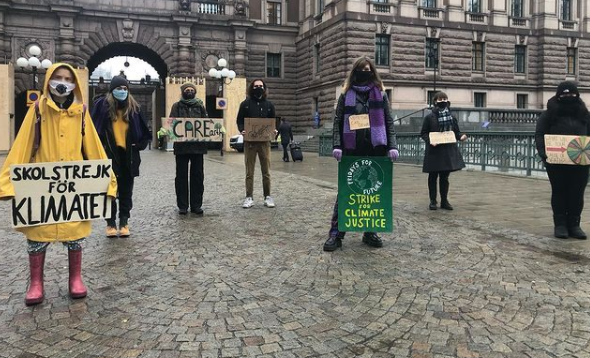 When it comes to the topic of saving the earth, nature, the wild creatures, and most likely the climatic change, there are few people who come to our mind and for me, it’s the Swedish teen girl Greta Thunberg. Also referred to as the Joan of Arc of Climate Change, Thunberg, the 18 years old Swedish environmental activist has been fighting climate change ever since she could speak up loud making her first protest at age of 15 when she staged her first school strike for climate change outside the Stockholm parliament building in 2018.

She came to headlines when she clapped back at Trump back then with her wise words which say, “You have stolen my dreams and my childhood with your empty words, and yet I’m one of the lucky ones.” Her words along with her works were praised worldwide making her the youngest Time Person of the Year, and two consecutive nominations for the Nobel Peace Prize(2019 and 2020).

It is surprisingly too much for a teen girl to do such effective things on her own for the sake of the world becoming the worldwide leader and a global environmental figurehead in just a span of fewer than 2 years. She has let the world know more about the things that we had been neglecting for years.

Greta Thunberg is a Swedish.

Thunberg is an 18 years old girl born in Stockholm, Sweden on January 3, 2003. Her nationality surely is Swedish and is of White ethnicity. Celebrating her 18th birthday in the year 2021, Thunberg has shown her more responsibility towards her mission and an urge towards saving the earth. Born as the eldest daughter in her family, she has a younger sister, Beata with whom she grew up in her hometown.

Thunberg’s family background is related to the entertainment industry.

Despite the fact that she was born in a renowned family, she chose to make her own path by not entering the entertainment field as her parents and grandparents did.

Her middle name is too long.

She struggled with Depression.

Even at an early age of 11, Greta suffered from several problems one of them being depression which she struggled with for over 3 or 4 years. She still has the problem of depression which she slowly is trying to cover up with medications and all. Also back in 2014, Greta suddenly stopped eating, talking, reading, or wanting to do anything which lasted for several months until she was finally diagnosed with Asperger syndrome. That basically meant that she spoke when she thought it was necessary.

Even so, instead of hiding the disease, her mother made her Asperger diagnosis public in order to help other families in a similar situation.

She is a vegan.

Greta not only has aspired the world of their duty towards earth but also has spread environmentalism in every aspect of her life. She hasn’t eaten meat ever since she was 12. She even challenged her parents to lower the family’s carbon footprint and overall impact on the environment by becoming vegan, upcycling, and giving up flying.

She even sailed across the Atlantic to reduce the carbon footprints.

She learned about Global Warming at age of 8.

She first got introduced to global warming and its effects at an early age of 8 when she watched a documentary about climate change at school. Ever since the day she realized and became aware of the damages that humans have made and are still doing to the planet, she couldn’t stop but to think and speak about climate change.

By the time she was 11, she had become so desperate and sad in the same place about the state of the earth that she even temporarily stopped talking and eating losing 10kg(22 lb) in two months.

Her first public activism started when she was 15.

After convincing her parents to adopt a better lifestyle, she started to make her move in public initially spending her school days(Friday) outside the Swedish Parliament to call for stronger action on climate change. She was photographed holding a Swedish sign reading “Skolstrejk för klimatet”(School strike for climate). The pictures went viral and now #FridaysForFuture is an international movement.

She was just 15 when she made her first move.

She is a role model of several young activists who has been running for the betterment of the world. Getting influenced by her work, other students also got engaged in similar protests in their own communities. Together, they organized a school climate strike movement under the name “Fridays for Future” which now is a worldwide movement.

Since then student strikes take place every week somewhere in the world. In 2019, there were multiple coordinated multi-city protests involving over a million students each. All her inspiring works have been described as “The Greta effect”.

She made headlines worldwide with her powerful and blunt speeches that she delivered at the United States Congress events since 2018. She got worldwide recognition with her speech at the UN Climate Action Summit in 2019 where she proclaimed then-US President Donald Trump saying, “You have stolen my dreams and my childhood with your empty words and yet I’m one of the lucky ones.”

She continued, saying “right now is where we draw the line”. Not only that she even told an audience of United States Congress members saying, “Save your praise” adding “You haven’t tried hard enough. Sorry.”

She is loved by several celebrities worldwide.

With her positive appeal and her fearless approach to speaking truth to power, Great has earned millions of hearts all around the world. One of the millions includes the former US President Barack Obama whom she met upon arriving in New York who was so impressed with her that he even called her one of the “planet’s greatest advocates”. He even told that the two of them represented a team who are urging for the betterment of the environment.

Not only him but a lot of celebrities around the world were impressed by her actions and speeches that she ruled the social media sites coming in every IG stories, posts, and Twitter posts.