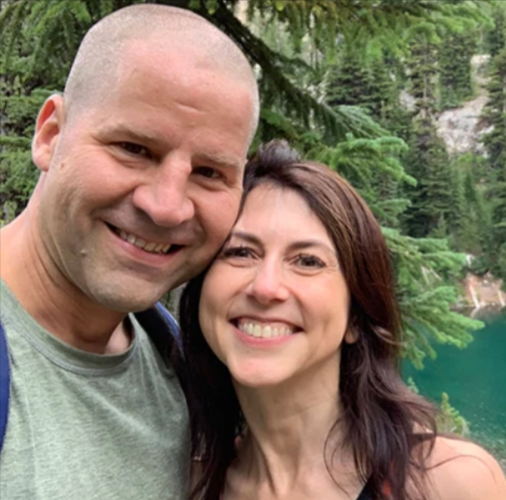 An American novelist and a billionaire philanthropist, MacKenzie Scott is a well-renowned personality more precisely known for her relationship with Jeff Bezos, founder of Amazon and Blue Origin. Having married Bezos, the current richest person in the world, for almost 26 years from 1993 till 2019, Scott also had her involvement in the founding of Amazon.

Herself being a novelist, Scott also has won the American Book Award for her 2005 debut novel, “The Testing of Luther Albright” in 2006. She is also a signatory to the “Giving Pledge” and has been serving as the executive director of Bystander Revolution since its foundation in 2014.

Besides, Scott has a whopping net worth estimated to be around $57.5 billion, thus making her the third-wealthiest woman in the world, and the 20th-wealthiest individual overall. Scott previously made headlines when she had a high-profile divorce with her first husband, Bezos back in 2019 and currently is making headlines following her recent marriage with a high school chemistry teacher, Dan Jewett.

The news was as shocking as it could ever be and has been surfacing all over the media. In today’s article, let’s get to know more about Dan Jewett.

After an almost two-year break down of Scott from her previous relationship with Jeff, she has finally found love again with a Seattle-based school teacher, Dan Jewett. Jewett is an aspiring and dedicated teacher who has been in the teaching profession for years. Talking about Jewett, he is an energetic and passionate teacher of Science who has been working in this field for the majority of his life.

He recently worked as a chemistry teacher in a renowned school whose annual fee is around $38k, it was the same school where Scott’s children were studying. However, now as the news of his marriage with Scott surfaced, his name has been removed from the school staff.

Before joining that school, Jewett previously taught science at The Bush School in Seattle for almost 5 years from 2011 to 2016. He also taught chemistry classes at Harriton High School in Bryn Mawr, Pennsylvania from 2006-2007. To be more precise, Jewett is a very friendly, energetic, and lovely person who always loved what he was doing, loved his own way of life, loved his teaching profession and his relationship with his students.

After dating Jewett for some time, Scott decided to move on to start a new life. They tied a knot in a private marriage ceremony in 2021 which they confirmed on the page of “Giving Pledge” in March.

There’s a story behind how Scott out of nowhere met him. The school where Jewett took classes, was the same school where Scott’s children used to go and that’s where they met for the first time. After meeting each other and having some parent-teacher conversation, they found that they clicked and shortly after began dating.

The most beautiful fact is that the couple actually bonded over their shared love of philanthropy — even using their marriage announcement as a way to draw attention to a charitable initiative.

His adhering personality has even let Bezos happy for the new couple as he said, “Dan is such a great guy, and I am happy and excited for the both of them”. Whilst, Scott is starting a new life with Jewett, Bezos is also in a happy relationship with TV host and actress Lauren Sanchez.

Who is MacKenzie Scott? How did she Became the World’s Richest Woman?