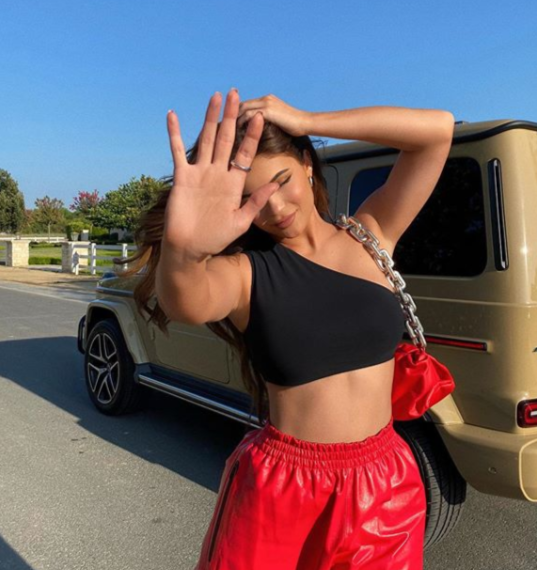 The beauty mogul and the 2019 world’s youngest self-made billionaire, Kylie Kristen Jenner, known as Kylie Jenner, born on August 10, 1997, is one of the most searched and followed celebrities all around the world with over 197 million followers on Instagram: @kyliejenner. Not only that she is popular on social media for just her jaw-dropping physical appearances, but also for the fact that she is one of the most influential fashion personalities being a socialite, model, and businesswoman all at the same time.

Kylie Jenner was first exposed to the spotlight when her family debuted its reality television series, “Keeping Up With The Kardashians” on E! in 2007. Jenner was just 9 years old at that time. Since then, she has harnessed her family’s fame and fortune to begin her business ventures. She currently serves as the founder and owner of multi-million worth cosmetic company, “Kylie Cosmetics”.

Regarded as a member of the Kardashian-Jenner family, Kylie Jenner is the youngest born daughter of Bruce Jenner(now Caitlyn Jenner) and Kris Jenner and the youngest sister of her 5 elder popular siblings: Kendall, Kourtney, Kim, Khloé Kardashian, and Rob. With such a massive trademark and untouched popularity, Kylie has outnumbered several celebrities and has been a hot topic all over the internet for her professional life and personal life interests including her dating history.

Who is Kylie Jenner Dating Now?

Kylie Jenner, the hottest and sexy woman on the planet right now, has undoubtedly millions of men fall in love with her for the past decade. Whether you’ll believe or not, but Jenner has never let her fans down when it comes to her glam and posy “Kylie” world, mostly referring to her jaw-dropping hour-glass body physique as she recently got featured on Cardi B and Megan Thee Stallion’s hit song, “WAP”.

Not only she makes her fans’ heart beat fast with her marvelous body but also with her life details: the breakups, babies, and bloody feuds with boyfriends’ exes.

Like always, this time also Jenner hasn’t let her fans down as ever since she called it quit from her previous relationship with Travis Scott, there have been speculations about Jenner dating none other than her sister, Kendal Jenner’s BFF and Kylie’s ex best-friend, Jordyn Wood’s rumored ex-boyfriend, Fai Khadra.

Khadra is a Saudi Arabia-born Palestinian model and singer, who was previously rumored to be dating Kendall Jenner. The rumor began to take an inclination to a height after Kendall began posting his photos alongside her frequently on her Instagram. Khadra was even spotted alongside Kendall at Justin Bieber and Hailey Baldwin’s wedding in Bluffton, South Carolina, the USA in 2019. This led to the speculations that they were dating. However, Kendall was quite fast in quashing the rumor as she cleared the mind posting a photograph with him on her Instagram account captioning, “we don’t date he’s just my date”.

Two years prior, he was allegedly said to be in a relationship with Jordyn Woods,(Kylie Jenner’s ex-best friend) after they were spotted holding hands, for which they never released any statement.

As for now in 2020, Fai keeps making unmentioned appearances on Kylie’s Instagram, that is one of the reasons for fans to be convinced they are now dating. It all started in June 2020, when Kylie began posting sexy lingerie pics clutching on anonymous man-shoulder.

Khadra’s name came up as a party friend of Kylie Jenner after Jenner made headlines for breaking social distancing laws in California with two public outings accompanied by Khadra at the same time of June 2020.

Jenner also shared multiple photos of her non-distanced Utah vacation where they were spotted hanging in the pool and climbing mountains along with their other friends. On June 7, 2020, Fai and Kylie went clubbing at the David Arquette-owned Bootsy Bellows despite the shelter-at-home order in California.

Another news hit headlines following Jenner’s other heart breathing post along with Khadra in Paris on August 29, 2020. Kylie even posted photo evidence on her Instagram Stories and also on posts on a getaway to Paris.

Even on Khadra’s 29th birthday on September 9, 2020, Kylie posted a birthday post to Fai with an eight-photo Instagram story. These photos have left everyone in a gasp as Kylie doesn’t post photos of other people outside of her own family and her best friend Stassie Karanikoalou. With such strong evidence, almost 99 percent of her fans have speculated about the couple dating each other however, it hasn’t been confirmed yet.

Though being one of the most followed personalities on Instagram, Kylie Jenner, who is a hot topic on the planet right now, has always tried to keep her private details as secret as to her pregnancy back in 2017. But when it comes to about her dating life and her personal love life, Jenner can’t keep secrets from the sharp eyes of her fans.

However, there are still some secret relationships of Jenner that most of her fans haven’t any clue about and will never believe that Jenner once dated them.

Jenner’s most committed and most healthy relationship was with popular rapper Travis Scott. Scott and Jenner met for the first time while Scott was performing at Coachella while he was on his 2017 tour. As soon as they met each other, they clicked and went together on his tour shortly after began dating in April 2017.

Their love for each other turned out to give them the best gift as just a month later, Kylie became pregnant with their first child, Stormi Webster, born on February 1, 2018. Kylie kept her pregnancy a top-secret topic as much as she could.

The couple has sparked their romance on several platforms including Grammy’s and other shows. However, in October 2019, they split co-parented their daughter together for few months before getting back together in March 2020. Even so, they haven’t labeled their relationship but seem to be on good terms.

Though her relationship with Travis was the most committed, her first serious relationship was with rapper Tyga. Her relation with Tyga was the longest as they dated for over 3 years. They met for the first time in November 2011 at Kendall Jenner’s 16th birthday party, while Kylie was just 14 and Tyga was 21. Almost 2 years later, Kylie posted a photograph of Tyga on her Instagram in July 2014. And boom! just a few days later, Tyga called off his engagement with his girlfriend of 2 years and the mother of his son, Blac Chyna.

In October 2014, they officially went on social media together with a couple of Halloween costumes. Even so, they claimed to be just friends until Kylie turned 18 when Tyga brought her a $320k worth Ferrari for her 18th birthday. Just months later, Kylie unveiled a massive promise diamond ring, however, they never got married as they called it off in 2017, just weeks before Kylie started dating Travis.

This relation is Kylie’s most untold relation ever as neither of them admitted to dating officially, however, there were heavy speculations about Jaden being Jenner’s first love back in 2013. During that time, Kylie denied rumors of their relationship, claiming Jaden to be just a close friend. “I don’t have a boyfriend, but I do want that boyfriend prom experience”.

Talking about prom date, Jenner talked about Jaden saying, “I would want to go with one of my best guy friends, like Jaden[Smith]. I know I’d have fun with him – he makes me laugh and he is a great dancer”. But they never went out official.

Even before getting caught up with Jaden, Kylie dated singer Cody Simpson briefly. Simpson is currently dating popular singer Miley Cyrus. While Jenner and Simpson were dating, they had a very fewer media interaction but there’s a clip of Simpson joking about his breakup with Kylie on “Hello Ross”. He even jokingly said, “The whole K-O-D-Y(Kardashian-Jenner) thing didn’t work for me”.

Kylie Jenner began dating while she was just 12 years old. Her first boyfriend is rumored to be Ramsey IV. They were rumored to have dated from 2008 for 3 years till 2011. Besides, Jenner was also rumored to have her bodyguard named Tim Chung, which was completely a false story.